For many nurses, the American Journal of Nursing is a journal we were introduced to as a student, but for one reason or another it faded into the past with little notice.  But this 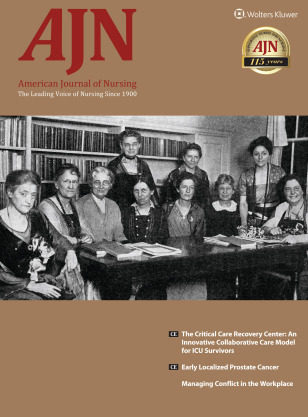 is a nursing journal that has a remarkable history, since its founding by Sophia Palmer in 1900.  The early contributors to the journal were significant nursing leaders who played major roles in establishing nursing as we know it today.

Charlene Eldridge Wheeler conducted an analysis of the first 20 years of AJN that was published in ANS in 1985. Charlene’s abstract provides a succinct summary that reveals not only the importance of AJN in shaping nursing as a profession, as well as the significant connection that the Nurse Manifest project shares with the journal and the early leaders who wrote the early content:

The editorial position and content of each issue of the first 20 years of the American Journal of Nursing were explored in relation to the emergence of nursing as a profession. Themes identified reflect professional issues, socialization of nurses, and the influences between other major social/political movements. The evidence of the study reveals strong nursing leadership toward (1) legitimatizing nursing as a self-controlled profession and (2) generating reform in nursing and society at large. The evidence of this study contradicts many prevalent popular views about the history of nursing.

But fast-forward to today – this historically significant journal is well worth noticing, and noting the connections that persist with the values that we speak to on this NurseManifest blog.   In the March 2015 issue, Editor Shawn Kennedy writes about the significance of the March Women’s History Month, and the importance of nurse leaders throughout history, women who are largely unknown and unacknowledged but whose accomplishments were ground-breaking.. You can see Shawn’s Editorial, and follow the journal on the AJN blog – Off the Charts.

The March issue, like all of the recent issues, contains several articles that connect in spirit to our NurseManifest project –

You can see the entire table of contents, and at least view abstracts on the AJN web site.  If you have not seen AJN lately, I highly recommend taking another look, and follow Off the Charts!